Per Sivle was the son of Eirik Hansson Sivle born in 1825 and Susanna Andersdtr. Ryum born in 1821. Eirik Sivle was born and grew up at Sivle, Susanna was born and grew up at Ryum in Flåm. Per arrived in this world in 1857 in Flåm; he was a twin but was the sole survivor. His mother had two twin births after having Per, but all were still born. Following the last birth, Susanna became ill and died when Per was two and a half years old.

His father sold farm animals and travelled a lot and was unable to take a little boy on his travels. After his mother’s death, Per stayed with various relatives for the first few years, but from the age of 6 he was brought up by Botolv and Brytteva Brekke. Brekke was the neighbouring farm to Sivle. Per grew up under good conditions at Brekke, and he showed early signs of being clever at school and his foster brother, Olav Brekke was a good teacher for him.

Per spent a lot of time at Sivle, visiting his grandmother, and it is said that he often spent time reading the collection of sermons to his grandmother.

Just having reached the age of 20, Per wrote his first poem in Norwegian: at school they were only taught Danish, but it was important to Per to write in his own dialect. The first poem was:

The first song I ever heard
When in my cradle lying.
Was mother`s heartfelt lullaby
Which ended all my crying.

This is one of the best and most well-known poems written by Per Sivle. He wrote this poem longing deeply for his mother, who had died far too early.

There are many qualities in Per’s poems, and he captures many, both in his storytelling in Sogor og Vossastubbar, and as a poet of many poems. During the last year at secondary school he became seriously ill with the measles and the illness lead to chronic headaches that he suffered from daily for the rest of his life. This led to much feeling of melancholy, which periodically prevented his writing.

The happiest period of Per’s life was in Denmark at Askov Folk High School from 1886 onwards. This is where he made his literary breakthrough, and he also met his wife Wenche von der Lippe Nilsen from Bergen. 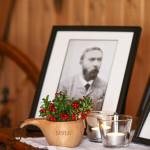 They had a daughter Susanna (Sussi) Sivle, born in 1888. Per could not stand living any longer and he committed suicide on the 6th of September 1904, just 47 years old. Much could be included about Per’s poems. He had a good trait of always siding with the weakest in society. Much of his poems, Vossastubbane and Sogene are about things that Per experienced in his local area at Brekke, Sivle and Stalheim.

The stories were told in an excellent manner.