According to a genealogical book from Vossestrand, the first farmer at Sivle was called Knut. He was a farmer there from 1563. But there are indications that people have lived here long before this. Several findings during soil preparation at the farm show that there was a settlement here from the early to late iron age. The objects that were found are now kept at Bergen Museum. There is also a grave stone lying in front of the farm house at Sivle, which dates back to the time of migration around 600 AD.

The farm at Sivle was hard to work, but yielded good crops. The farm faces south-west and spring comes early, and the hilly ground has good drainage. Sivle was known to be a good farm for growing grain during the 1800s and has always been a versatile farm with cows, sheep, goats and horses. 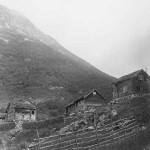 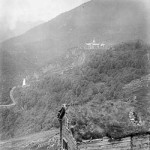 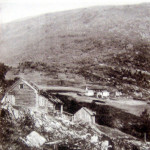 Several crofts were tied to Sivle, and some of these are independent farms today. Two crofts still belong to Sivle today, Naole and Hadlhustræet. Hadlhustræet lies by Vinelva, where Sivle has a productive forest. Here you can still see the remains of the foundations.

Naole lies on a natural ledge between Sivle and Jordalen; the old thoroughfare to Jordalen passed by here. There have been 4 crofters at Naole, the first one settled in approximately 1870. The last one moved away during the 1930s. Today the house has been demolished, just the foundations are left.